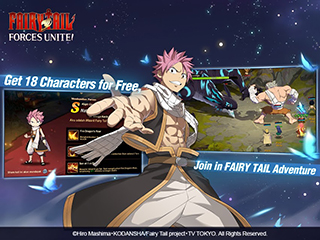 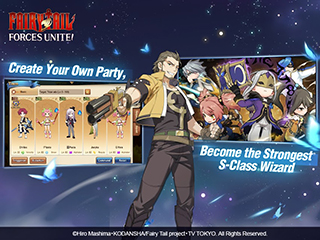 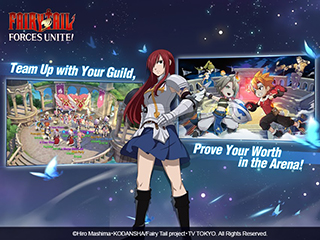 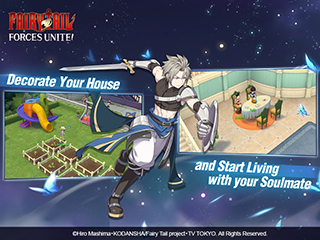 The game adopted a round-based battle playstyle. With lineup configuration, Magic Beast selection, and Skill order all heavily influencing the battle outcome, the wizard’s battle strategy will be put to test!

Published by Garena and authorized by Kodansha, FAIRY TAIL: Forces Unite! Is here to take you into the world of magic for an adventure with the strongest Guild “FAIRY TAIL”!

"Officially licensed from Kodansha - Adapted directly from the original comic!"

Using original voice actors from the anime series as well as a remade original storyline. Players can see the FAIRY TAIL storyline from a new perspective. Choose, customize, and play original characters to join in a magical adventure with friends and form the strongest team in FAIRY TAIL: Forces Unite!

The game adopted a round-based battle playstyle. With lineup configuration, Magic Beast selection, and Skill order all heavily influencing the battle outcome, the wizard’s battle strategy will be put to test! Together with combo moves and special skills that FAIRY TAIL assistants will cast during battle, the enthusiastic battle scenes in the comic have just been ever improved.

"Choose 1 of 8 Original characters - Become the No.1 Wizard!"

Players can choose 1 of 8 Original characters in the game with all their uniqueness! In addition, players can also choose a total of 9 classes, namely Requip, Force, Velocity, Soundwave, Snow, Guardian, Alphabet, Elixir, and Cure. Each class corresponds to different magic types and further derives into various exclusive skill development systems. Players can freely distribute their stats and strive to be the strongest SS-Class Wizard.

<"Form the strongest Guild - Dominate the Leaderboard and become the No.1 Guild!"

Form your own Guild or join forces with other players. Let Guild members be your most reliable backup during your adventure! Establish internal cohesion as firm as “FAIRY TAIL”, challenge S-Class quests and fight against the Dark Guild!

"The most complete Social System - Play with millions of people in FAIRY TAIL: Forces Unite!"

Comes with a complete Social System! Players can have a lot of friends, become a mentor or apprentice, and even find your true love in the game. Players can also use in-game Voice Chat to communicate directly with other players, creating a gaming experience like never before!

Players can collect a variety of unique Outfits and Mounts in the Game. Choose the best Outfit and become the coolest Wizard in FAIRY TAIL: Forces Unite! Use special Mounts such as Motorcycles, Hot Air Balloons, Trains, and many more!